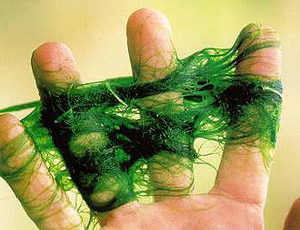 While a little bit of algae is good, if left to its own devices it will quickly begin to overrun your tank and cause quite the problem. Algae comes in different colours caused by different factors, the most common being Green Algae.

Whilst small amounts of Green Algae is a good food source, too much can make your tank quickly look like pea soup. Caused by too much light and dissolved waste, a solution to help prevent overgrowth would be to make sure your tank is not in a source of direct sunlight and to keep the lights on a timer. Tanks are recommended to have about 6 hours of light but this depends on the size of the tank.

Overfeeding your fish also causes a build of dissolved waste, if the food isn’t eaten in 5 minutes then you’re feeding too much. Any leftover food should be removed immediately.

Red Algae doesn’t always appear red as the name suggests, but can also be black, blue and green in colour. Caused by a lack of Carbon Dioxide in the water, it appears in threads around the tank High nitrates, infrequent water changes and inappropriate lighting are all contributing factors on top of this. If not controlled, Red Algae can literally starve plants or coral in the most severe of cases, so treating your pond/tank is incredibly important.

Placing fast-growing plants in the tank can help use up nutrients that algae would otherwise use to spread, slowing the growth of algae. Also introducing an algae-eating fish can help with this problem as long as the fish eats red algae specifically as the main part of their diet.

Brown algae causes your tank water to become quite cloudy and makes the tank generally unappealing as the algae blankets everything with what can be describes as a brown fur. Although easy to wipe off, it can be hard to get off of gravel. Caused by a lack of sunlight, excess nitrates and low oxygen levels, it’s most commonly found in newly set up tanks.

Some catfish readily eat up brown algae, but if you’re not eager to get one increasing the light in your tank can help inhibit the regrowth of it. Any surface that brown algae covers would need to be wiped down to remove it and gravel would need to be vacuumed, vacuuming the gravel also helps to slow down the regrowth of the algae. Brown algae can also be prevented by regular water changes and tank cleaning.

Blue-green algae, also known as cyanobacteria, can be brown, black or red in colour as well as blue-green. Very slimy in appearance, it lets of a fishy odour and will quickly spread. Not really an algae, it’s actually a bacteria which can be spread by bringing it into the tank. Also caused by poor water conditions due to high levels of organic waste and excess light with anaerobic conditions. High levels of nitrates and phosphates which leads to the buildup of organic waste are prime in causing the overgrowth of blue-green algae, which can be shown from regular water checks.

Partial water changes and regular tank cleaning can help prevent the build up of the algae, as well as reducing light and physical removal. The blue-green algae is also found in new tanks before beneficial bacteria colonies have hold on the tank.

Blue-green algae can never be permanently eradicated, however there are steps that can be followed to help the re-occurrence of an overgrowth. Start by scraping the glass, scrubbing the rocks and plants, and vacuuming the substrate. Perform a partial water change of 15-20% and turn the lights in the tank off for three days. On the fourth day turn the lights back on and perform another 10-15% water change. That should get rid of the algae overgrowth and reduce the elevated wastes and nutrients that support its growth. If there is still Blue-Green Algae growth, the process should be repeated. 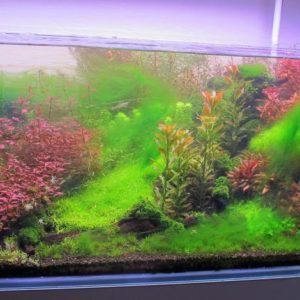